I vividly remember the day our coffee machine at work broke down. For a full afternoon we were completely unable to make espresso. As you may expect customers were not exactly thrilled. This did however, open my eyes to much of the confusion surrounding espresso and what exactly it is. Despite telling every customer we served that we could not offer any espresso-based drinks almost all of them would still ask for one, being shocked that it wasn't available. We quickly realized that writing a list of still available drinks was a much better way forward. The most common thing said to us that afternoon by far was, "I just want a normal coffee". 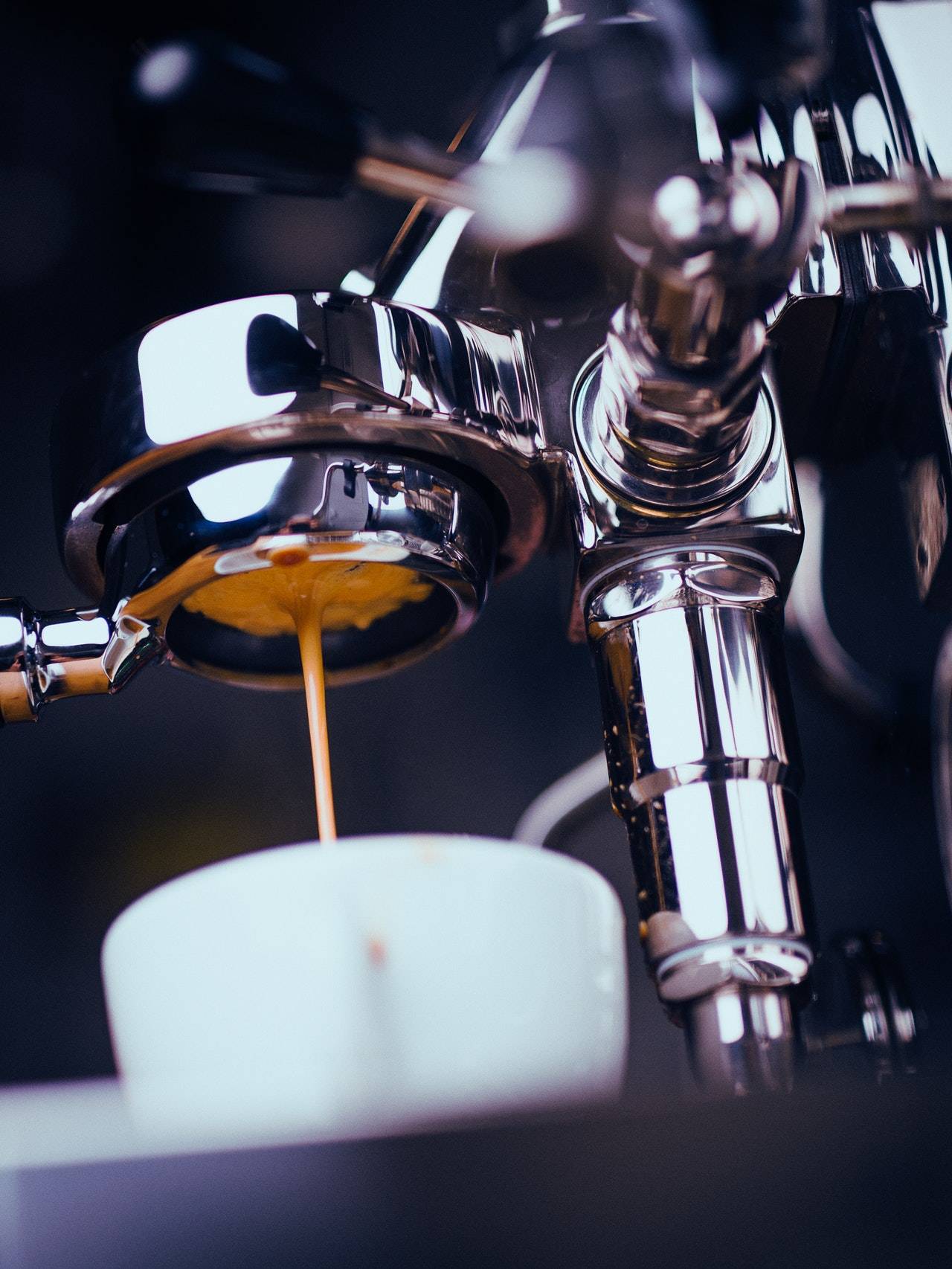 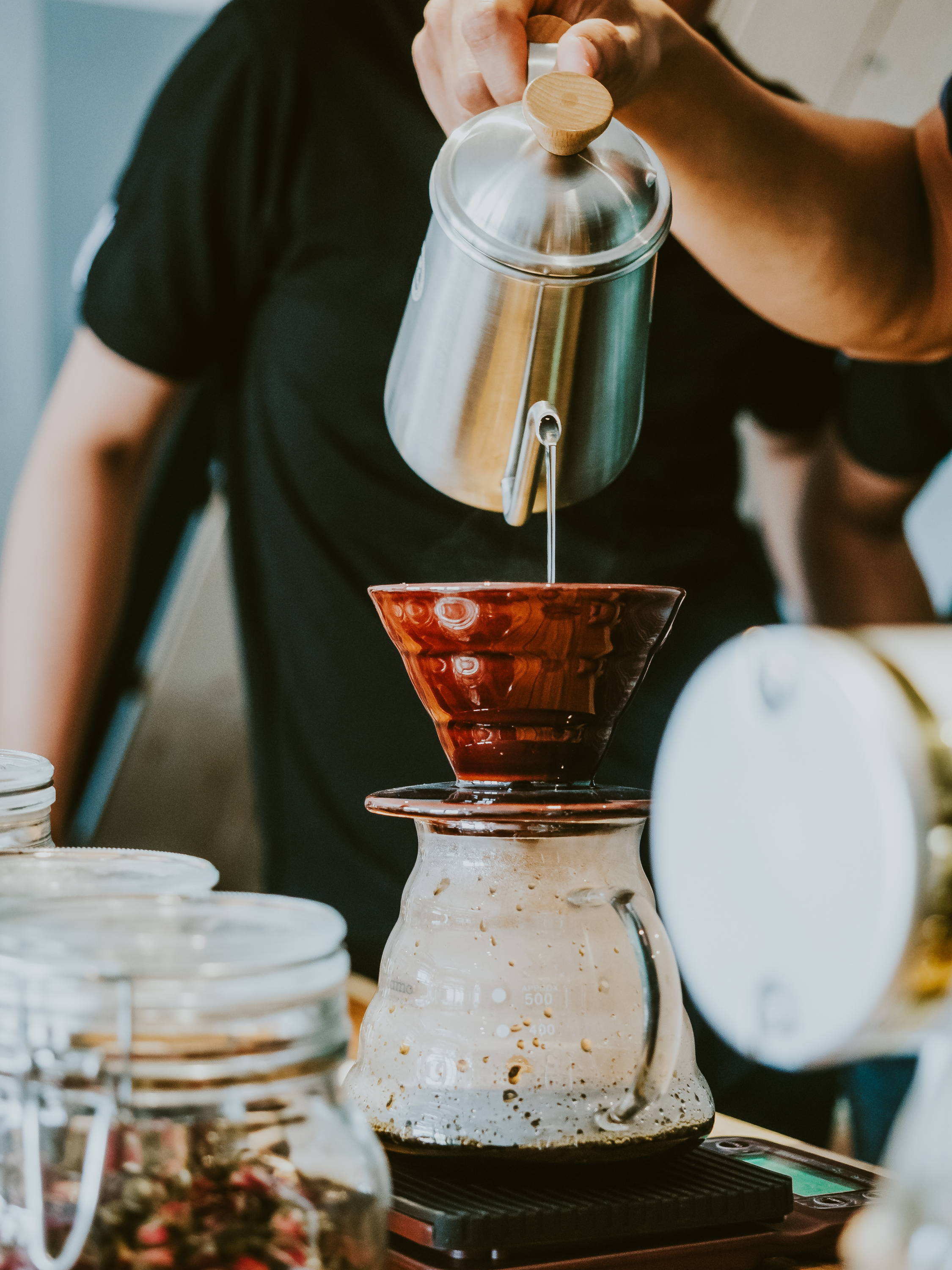 When people ask for a “normal coffee” they usually mean one of two things, either an americano or a filter coffee. Americanos are made by mixing espresso with hot water whereas filter coffees use a different brewing method. Filter coffee is the kind of coffee you are far more likely to make at home or find in your office. Manual filter coffees are often sold at specialty coffee shops where staff have been trained to make them as consistent as possible. But what really is the difference between these drinks?

Filter coffee is made by running hot water over usually medium course ground coffee, often ground to around the consistency of sand. The coffee is placed in a paper filter, and water is run over it either automatically by a machine or manually. This is known as a percolation brewing method, meaning that water is moving over and through the beans as the coffee brews. The alternative to this is an infusion brew method, where the coffee grounds are submerged in water and brew over time such as in a french press. The most common types of filter coffee however, are all percolation brewed. 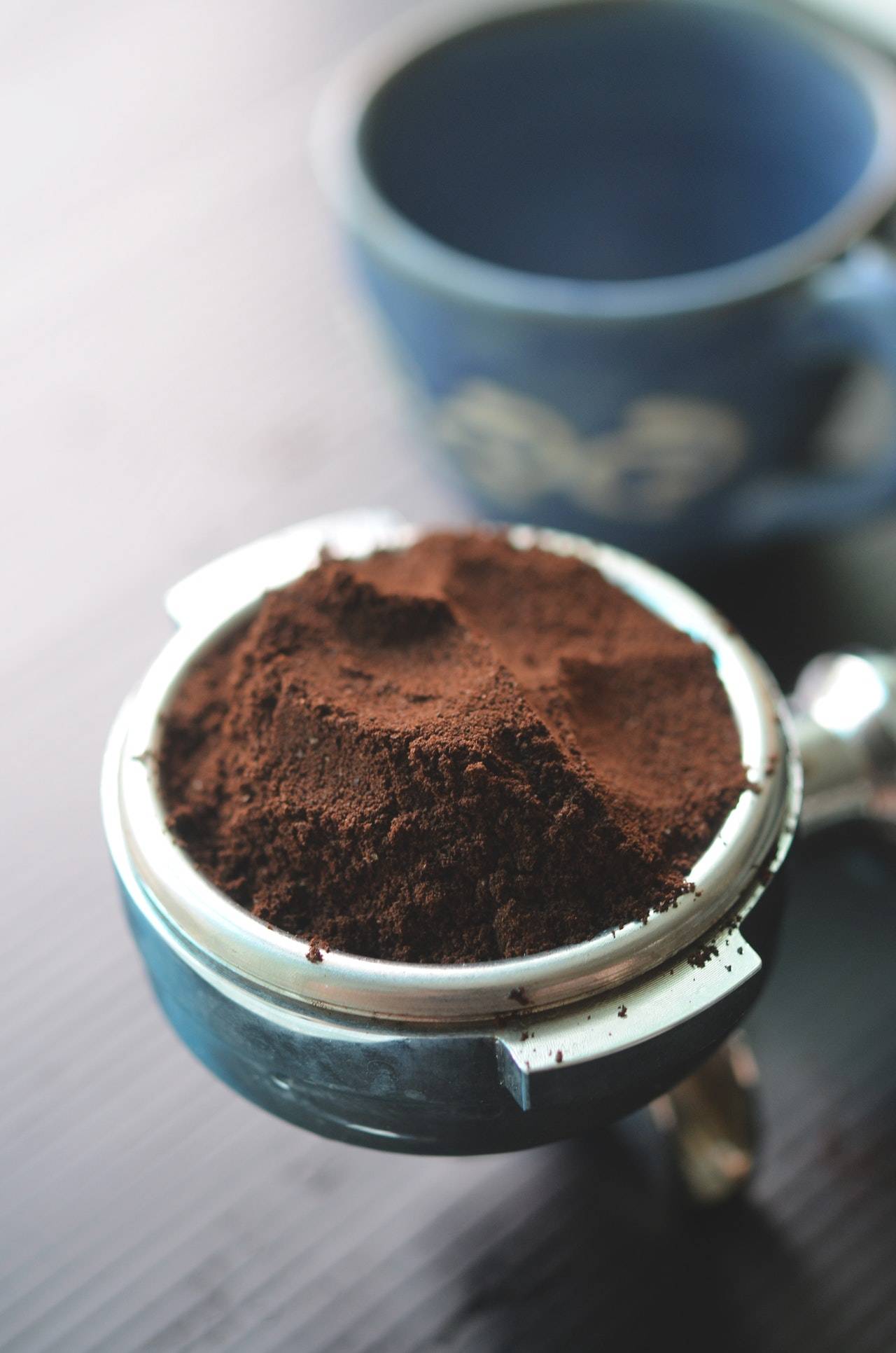 Espresso is made by finely grinding and packing coffee beans into a portafilter. This creates what is known as a puck. This is then put into an espresso machine and hot water is forced through it at a high pressure, about 9 bars, to create what we know as espresso. Espresso is quite a bit thicker than filter coffee, as it has a higher amount of dissolved coffee still in it due to the metal filter. Espresso also usually has a layer of light foam on the surface called crema, which is essentially carbon dioxide mixed with oils from the coffee. Crema is created due to the high pressure of the espresso machine forcing water through the coffee puck, and mixing with the carbon dioxide built up in the beans from the roasting process.

An espresso will typically be served as a double shot coming in at around 30-40ml. Its high concentration of dissolved solids and gases are what give espresso such an intense flavor, while its raw amount of dissolved solids may be lower than that of a filter coffee it will be contained in a much smaller drink. The caffeine content of espresso is highly concentrated as well, coming it at around 63.6mg per 30ml of espresso. Caffeine content in filter coffees can vary considerable depending on the specifics of the brewing process but safe to say they are often higher than this coming in as high as 185mg per coffee. But once again it is important to remember that this will be contained in a much larger drink, often 250-320ml or more, which is potentially 10x more liquid than an espresso. The brew ratio does not reflect the final concentration of the drink however. Coffee cannot be completely dissolved in water, most of it will be left in whatever it was brewed in.

While these ratios and numbers can seem a bit daunting or pedantic, they do have a real effect on the flavor of the coffee. The dissolved material in coffee are what we are tasting when we drink it. As you can imagine in an espresso, we are getting a huge amount of that flavor in a small package, this is why it is so intense. The sweetness, balance and caffeine of the coffee are all presented to us in their most concentrated form. While the numbers suggest that filter coffees are "stronger" than espressos, anyone who drinks espresso regularly will tell you otherwise. Because of its high concentration, when you take a sip of espresso your mouth is filled with all of these materials at once allowing you to taste them all. Filter coffees usually do have more caffeine in total, and may also have more dissolved material, however, having much more water to dissolve them in results in a less concentrated drink. All of the flavor is spread throughout the liquid meaning with any one sip, you will taste less of those materials than you would with an espresso. This is also why poorly brewed espresso can be particularly bad, any unpleasant flavors present will be strong.

Espresso is also uniquely suited for mixing in drinks. Due to its intense flavor it can infuse nicely with other liquids to make many of the cafe standard drinks. It forms the base of americanos, lattes and cappuccinos as well as a host of other hot and cold drinks. Filter coffee cannot really do this as its low concentration relative to espresso would mean that a lot of coffee would have to be mixed with say milk, for a latte, resulting in a very watery latte. 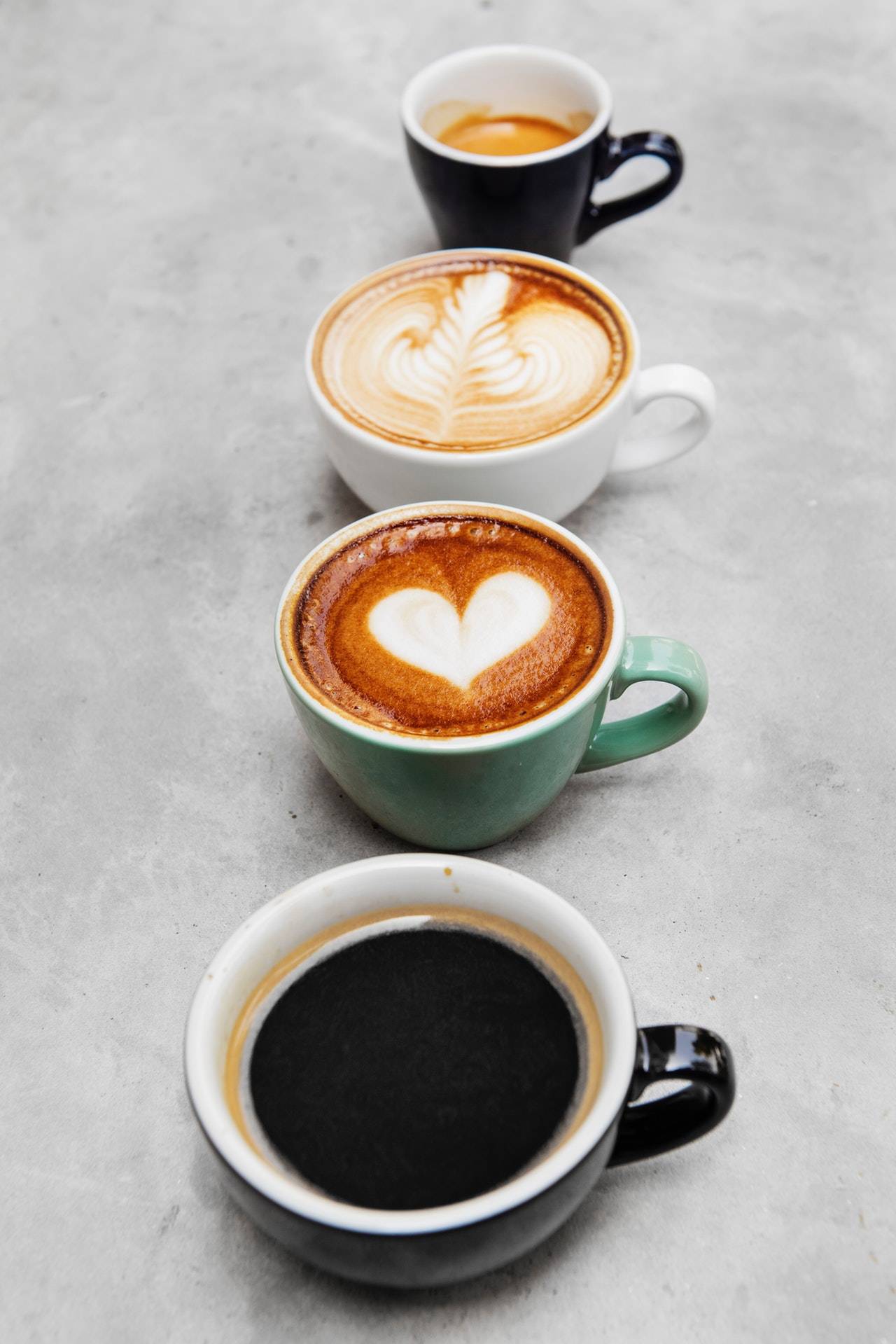 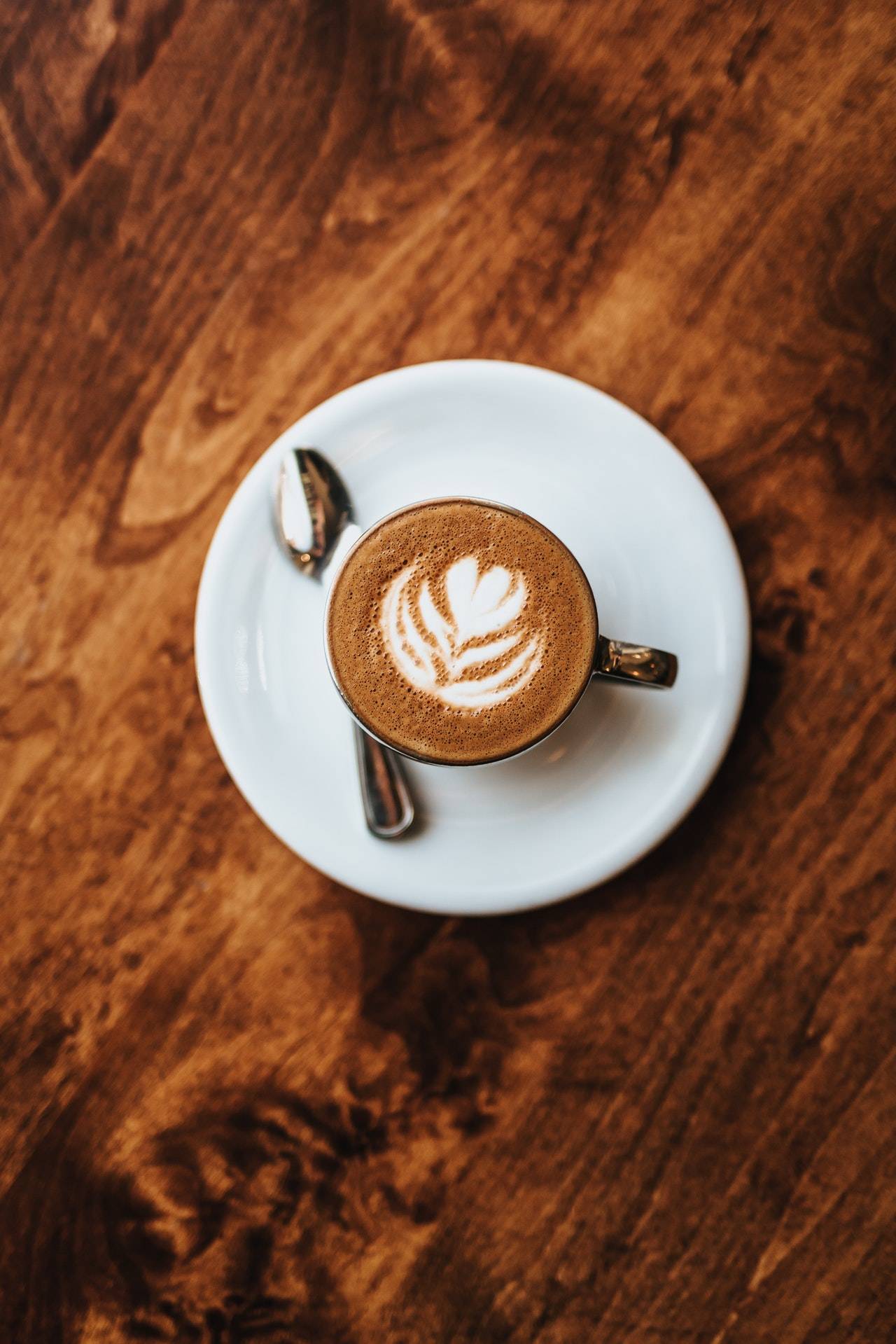 This is where the confusion begins for the “normal coffee”. In my experience working at a café, a “normal coffee” usually meant an americano. Many customers where confused by the difference between the two options, after all they are both served as black coffees with the option of milk. This is once again where the numbers become important. Americanos are essentially heavily diluted espressos, as such the intense espresso flavor is spread throughout the drink. This means the general intensity of the flavor is diminished but the boldness of the flavors will remain. A filter coffee however has extracted the coffee with all of the water in the final drink, meaning that the flavor is spread evenly and will often be more complex and have a broader range.

Which of these you prefer is very much up to personal taste. The espresso flavors present in americanos attract a lot of people and are often more what people expect when asking for coffee. Filter coffees are often less bitter, with more acidic and sweeter flavor notes. Personally, I prefer filter coffees as I enjoy tasting the breadth of flavor present in the coffee. However, coffees with strong chocolate, nut, or dark fruit flavor notes often make delicious espressos and americanos.

There is a catch to all of this however, and that is the quality of the coffee being used. While filter coffees are relatively common in homes and offices, they more often than not are made using rather low-quality beans. Supermarket bought pre ground beans are usually of a low quality and can be roasted and ground weeks before use. Coffee loses flavor quickly after being roasted and ground, becoming more bitter and losing much of its sweetness and nuance. This often results in filter coffee that doesn’t have many of the properties usually associated with the brewing method and that is sometimes closer to an americano due to its bitterness. I think this is why, despite often drinking more filter coffee than espresso outside of cafes, many customers want americanos and not filters when they ask for a “normal coffee”. Equally there are some sweet and gentle espressos, much of this is down to the beans and the person making the drink so don’t be scared to try new things or ask questions about what you’re drinking.

So, espresso or filter coffee? Ultimately it depends on what you are looking for. There are good and bad examples of both of these. I enjoy the subtlety and complexities of filter coffee myself and it is comparatively easy to make at home which is always a plus. Espresso can present rich warm flavors in a bold way and if you’re looking for a milky coffee it is certainly the way to go, as it will retain much more of its flavor. My recommendation would be to try as much of each as you can. It is always an interesting experiment to order the same beans as an espresso and a filter coffee as this is a great way to really see the difference the brewing makes to the flavor of the beans.

So, get out there and drink some coffee!